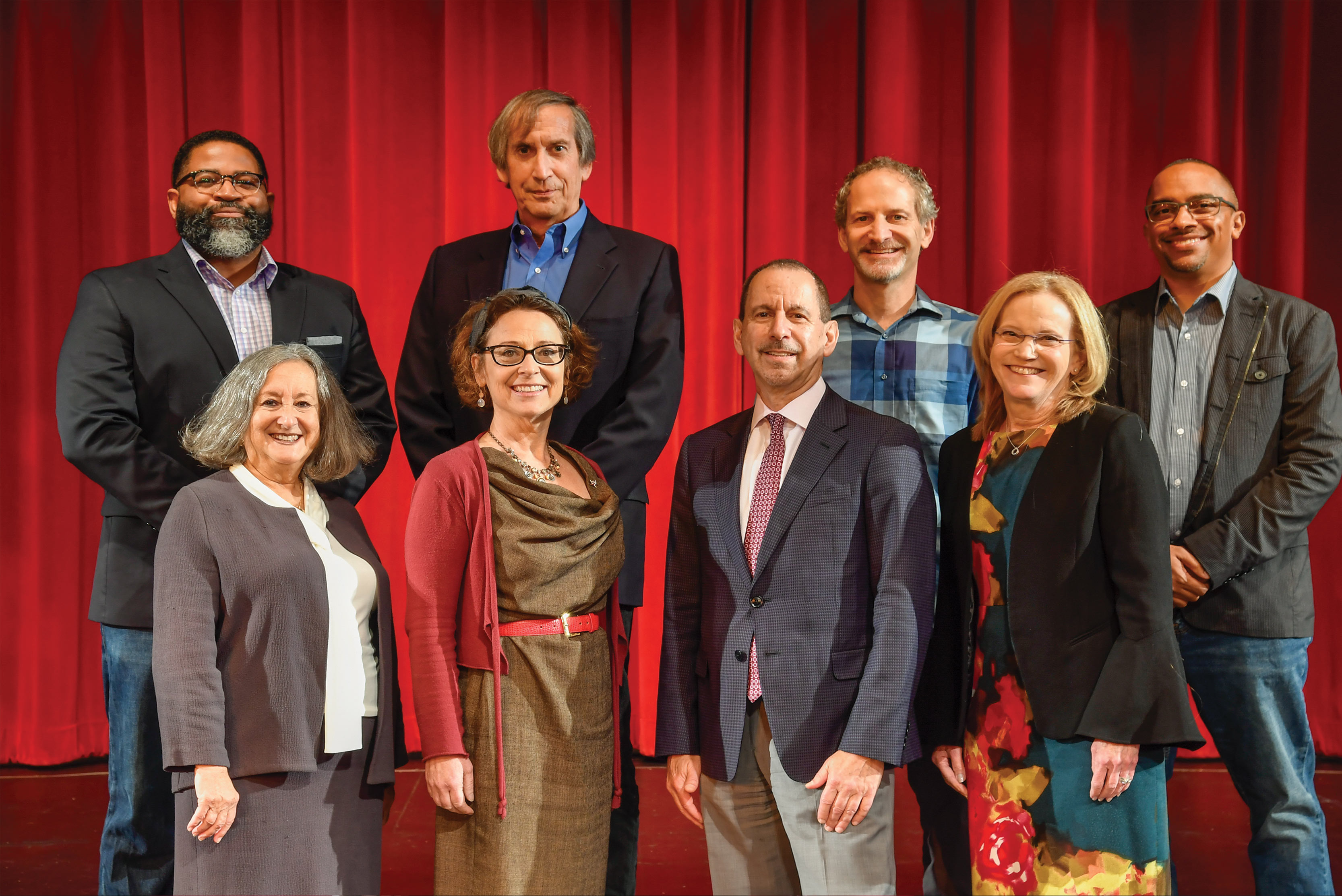 The newest class of the Shaker Heights High School Alumni Hall of Fame is comprised of eight men and women who have made significant contributions to the fields of health and medicine, law, foreign policy, advocacy, journalism, and arts and culture.

The 2018 inductees into the Shaker Heights High School Alumni Hall of Fame are:

Abby Goulder Abelson, MD, Class of 1970, is the Chair of the Department of Rheumatic and Immunologic Diseases at Cleveland Clinic. She is also President of the Rheumatology Research Foundation, the largest private funder of rheumatology research and training in the United States, and a member of the Board of Directors of the American College of Rheumatology. Her medical practice specialty is in the area of metabolic bone diseases and osteoporosis. Abelson earned her bachelor’s degree at Hamilton College and her medical degree at Case Western Reserve University School of Medicine. She completed her residency in Internal Medicine at Mt. Sinai Hospital in Cleveland, where she was Chief Resident, and then completed her Rheumatology fellowship training at University Hospitals of Cleveland. She and her husband Tom are the parents of three Shaker graduates and the grandparents of five grandchildren, one of whom is a student in the Shaker schools.

Michael Green, Class of 1980, is Chief Executive Officer and founder of the Center for Environmental Health. CEH is a leading advocate for comprehensive chemical policy focused on changing corporate behavior in order to protect people from illnesses related to pollution in our air, water, products and food. Prior to founding CEH in 1996, Green designed a solid waste management plan for the Tibetan refugee community in Dharamsala, India, and cared for the sick at Mother Teresa’s mission in Calcutta. He is a recipient of the California Wellness Foundation’s Leadership Award, and has also been awarded the prestigious Compassion in Action Award for his work protecting children from lead by the Dalai Lama Foundation. He has worked at the U.S. Department of Energy’s Office of Environmental Management and at the EPA. Green holds a master’s degree in Public Policy and an M.S. in Natural Resources, both from the University of Michigan.

David A. Hansell, Class of 1971, was appointed Commissioner of the NYC Administration for Children’s Services in February 2017. Hansell has served as a consultant to non-profit, government, and philanthropic organizations on a diverse array of health and social services policy and advocacy issues, most recently as Head of KPMG’s Human & Social Services Centre of Excellence.  From 2009-2011, he served as Acting Assistant Secretary and Principal Deputy Assistant Secretary for the Administration for Children and Families in the U.S. Department of Health and Human Services. At HHS, Hansell’s responsibilities included child welfare, economic support, early childhood education, and special population programs. He has also served in prior governmental positions in New York City and New York State. Hansell is a graduate of Yale Law School and Haverford College.

Judy Harris, Class of 1966, is Senior Counsel in the Washington DC office of the law firm of Reed Smith. She practices telecommunications, consumer protection and trade regulation law, primarily before the Federal Communications Commission, the Federal Trade Commission, and the Antitrust Division of the U.S. Department of Justice. Prior to entering private practice, Harris clerked for the Honorable James A. Belson of the DC Superior Court. She interrupted her practice for two stints of government service, first in the Antitrust Division of the U.S. Department of Justice, initially in the Department’s Washington headquarters and then in its San Francisco field office. She was also a political appointee at the FCC in the Clinton Administration. She serves on several boards and is President of the Matthew Harris Ornstein Memorial Foundation. She earned a J.D. from The Yale Law School and a B.A. with highest distinction from the University of Michigan.

Aaron David Miller, Class of 1967, is Vice President for New Initiatives and a Distinguished Fellow and Director of the Middle East Program at the Woodrow Wilson International Center for Scholars in Washington, DC. For two decades he served in the Department of State as an analyst, negotiator and adviser on Middle Eastern issues to Republican and Democratic Secretaries of State. He has written five books, including his most recent, The End of Greatness: Why America Can’t Have (and Doesn’t Want) Another Great President. His articles have appeared in the Washington Post, the New York Times, and the Los Angeles Times, and his column “Reality Check” appears in Foreign Policy Magazine. He is a CNN Global Affairs Analyst and a frequent commentator on NPR, BBC and Sirius XM Radio. He is a graduate of the University of Michigan, where he also obtained his Ph.D.

Kathy Roth-Douquet, Class of 1982, is founder and CEO of Blue Star Families, the largest chapter-based non-profit organization in the U.S. serving active duty military of all ranks and services, as well as Guard and Reserve, wounded, and transitioning veterans and their families. While serving at the Pentagon as Principal Assistant Deputy Under Secretary of Defense (Acting), she received the Secretary of Defense Medal for Outstanding Public Service, and more recently received both the President George H. W. Bush’s Daily Point of Light Award and the Chief of Staff of the Army Outstanding Civilian Service Award. She is an author, most notably of AWOL: The Unexcused Absence of America’s Upper Classes from Military Service – and How it Hurts Our Country. She is a frequent speaker, writer, and commentator on civil military affairs.  She is a member of the Council on Foreign Relations and co-chaired of the Bipartisan Policy Center Defense Reform Task Force. She received her B.A. from Bryn Mawr College, her M.P.A. in International Affairs from the Woodrow Wilson School at Princeton University where she held a Woodrow Wilson Fellowship, and her J.D. from the University of San Diego, School of Law, Magna Cum Laude and the Order of the Coif.

Jamil Smith, Class of 1993, is a Senior Writer with Rolling Stone covering politics and culture. His writing has appeared in the New York Times, the Washington Post, Esquire, BuzzFeed and many other outlets. Smith has also been a contributing writer for the Los Angeles Times opinion section and for TIME Magazine, where in February of 2018, he wrote a cover story about the blockbuster film “Black Panther.” Previously, he served as a producer at NFL Films and MSNBC; a Senior Editor with the New Republic; and covered the 2016 presidential election as a Senior National Correspondent for MTV News. Smith attended the University of Pennsylvania. At Shaker Heights High School, he served as one of the earliest Minority Achievement Committee Scholars and was a news editor on the Shakerite.

Abdul Williams, Class of 1990, is a screenwriter, feature film developer, and winner of the 2018 NAACP Image Award for outstanding writing for the BET miniseries, The New Edition Story. He previously worked as development assistant for director Carl Franklin and for actor-director Denzel Washington, and as a junior executive at Lorne Michaels’ SNL Studios. He has written many successful Hollywood scripts, including Lottery Ticket and ConEd for Alcon Entertainment, and Surf’s Up 2, an animated film for Sony Pictures Animation. Williams’ latest project is The Bobby Brown Story, a BET series premiering this September. He is a graduate of Ohio University.